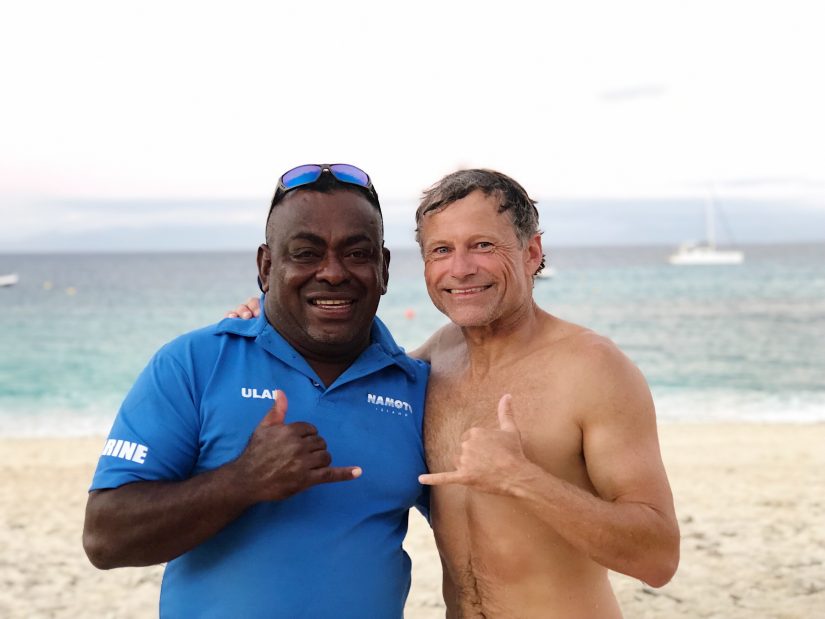 This week we’ve had some creative souls on the Island and one of them is musician/writer/speaker, Alex Woodard. He came to Fiji and stayed on Tavarua before Namotu was built. It was there he first met Ulai and 25 years later he surfed with him again… Here’s his story.

He was big… Samoan-football-player big, taking off way outside on overhead set waves and charging down the line like a freight train.

I jumped from the boat into the turquoise water, the jagged coral reef only a few feet under my feet. He paddled next to me on the way out to the lineup, and as a head-high wave stood up on the rock shelf in front of us, told me to go.

I went. A few arcing turns, a cutback, and a hundred yards later I kicked out just in time to see him pull out of the wave behind me, flashing me a shaka sign with a wide smile.

I haven’t been to this tiny island chain deep in the South Pacific in 25 years, not since my cousin and I traveled to one of these specks of sand and palm the summer I graduated. A well-funded documentary had already launched that particular island and a charismatic 12-year-old Fijian grommet named Ulai into the surfing stratosphere, and I got a photo with him the day I left the island, his head barely reaching my shoulder, to remind me of his unrelenting stoke whenever my own might be fading.

My cousin is with me now, too, but this time we’re on a different nearby island. Two and a half decades gone and we haven’t really changed… I don’t think any of us really do. We make mistakes, we learn from them, or not, we grow and evolve, but these are just leaves that blossom and brown with the seasons. The roots? The anchors running underground, drawing nutrients from the soil of our lives, the tendrils of where we began?

I paddled back out to the lineup and mentioned my memory of Ulai to the surfer next to me. He questioningly raised an eyebrow and pointed to the big guy who’d given me that first wave.

I made my way over to him and asked if he was Ulai. He nodded, and I said that while we met only 25 years ago, he may not remember me. He laughed and held a gnarled, hard-worked hand out of the water, which I took, closing a circle opened when we were both just kids.

Before the constant comparison of Facebook and Instagram, even before the world’s first website had gone live. So many waves have been ridden since then… waves of joy, disappointment, loss, laughter. Waves of expectation, reward, defeat, pulsing through the calm seas and gale-force winds across the ocean that is my life, that is all of our lives.

Right up to this wave a moment ago, a crystal wall of water spiraling over coral heads and fish, more vibrant than any screen will ever be.

I paddled back to the boat an hour later, the crease of sore fatigue cutting through my shoulder blades. Ulai flashed the shaka sign again with a wide smile as we pulled away, an aged mirror to a glossy photograph, buried in a castaway album I haven’t opened in two decades.

Ulai happens to be the head boat driver on our island. Maybe I’ll get another picture taken of us, and post the now-and-then on social media.