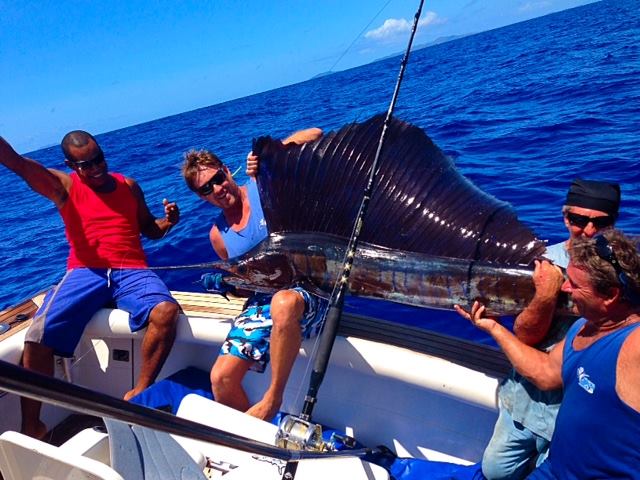 The warm waters of Fiji attract and host several types of marine life that guarantee world-class fishing. From giant trevally to dogtooth tuna, fish of all sizes roam the depths of the Fijian waters.

That's good news for seasoned anglers on the hunt for big game. The variety of Fiji fish species around Namotu Island, some specimens weighing in at over 100 kg, promises an exciting sport fishing adventure.

Below, we'll introduce you to the following types of fish you'll encounter when you head out on the water:

With a little patience and stamina – some of the above fish have a reputation for putting up a fight – you shouldn't have a problem hauling a few back to shore.

Commonly seen in Fiji from October to March, giant trevally can grow to 60 kg or more. They're silver in colour and have a compressed body. The most important thing to remember is that they're muscular and prone to fight when hooked.

This fish is a favourite of big-game anglers, and is even the focus of sport fishing competitions. It has a distinctive appearance with a prominent blue stripe splashed across the top of its body and a long pointed bill. They can grow to be massive. Some, mostly females, have been measured at over 800 kg.

With a long and colourful body, wahoo typically travel in packs. They have large jaws and very sharp teeth (be careful when you hold them!). While you'll occasionally come across some monsters, most wahoo weigh between 20 and 40 kg. One of the defining traits of this fish is its speed. It moves quickly. Once you have one on your hook, expect to put some effort into reeling it in.

Mahi mahi are among the smallest Fiji fish species targeted by big-game anglers. You'll find most of them weigh between 10 and 15 kg.
They have a long fin that rises from the head and extends to the tail. But its mark of distinction, the trait that truly makes it stand out, is its colours. The mahi mahi's body is a brilliant green while its fin is a rich aqua blue. Both colours change depending on the angle from which you observe them.

The Spanish mackerel is the smallest of the Fiji fish species favoured among sport fishing enthusiasts. With the exception of a few large sub-species – for example, the Indo-Pacific king mackerel – they usually weigh between 3 and 4 kg. They're silvery in appearance and travel in large schools. They're also fast and fun to catch. With proper trolling, it's not uncommon to haul a couple dozen aboard during a single session on the water.

The dogtooth tuna has a silvery underside and blue topside. It's known for its size and aggressiveness. It can reach 100 kg or more and shows a belligerent attitude when hooked. They dive quickly, which often results in snapping the tackle. Put simply, the dogtooth tuna rarely comes peacefully. There are, of course, many other Fiji fish species found in the tropical waters around Namotu Island. But the 6 described above are on the short list of most serious anglers visiting the region. Game fishing continues to be one of the most popular water activities in Fiji. Reserve a private villa at the luxurious Namotu Island Resort and treat yourself to a rewarding and unforgettable sport fishing adventure

Posted on Tuesday, October 27th, 2015 by Namotu Island in Fishing In Fiji