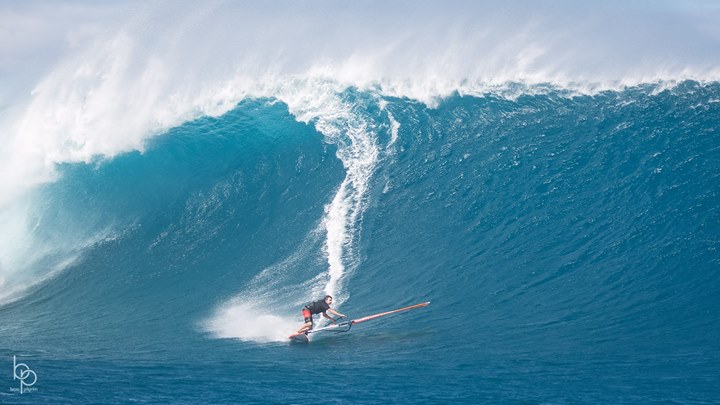 Cloudbreak is one of the most popular surf spots in Fiji. Located a few miles from Namotu, it's a left-breaking wave that breaks over shallow reefs. The reef beds create a dangerous environment for all but the most skilled surfers.

But Cloudbreak also produces gorgeous, fast tubes as its waves curl around the surfer. If you're coming to Fiji to surf, you owe it to yourself to learn everything you can about this wave.

There are 3 distinct sections to it: the point, middle and inside. The latter section (the inside) is often referred to as "Shish Kebobs" because of the shallow reefs found there. Those reefs have been responsible for countless injuries over the years. But if you manage to avoid them, you'll be treated to long, speedy tubes that can carry you for 200 metres or more.

From a distance, Cloudbreak is almost mesmerising. The waves are consistent and smoothly-formed with very little chop on clean days. At the same time, their height hints at raw power that's barely held in check.

The top (the point) of the break is where the wave is at its largest. Even the most adept surfers must stay vigilant while surfing this section. The wave breaks clean, but hard.

The middle section is where the tubes start to form. This part of the wave is slightly smaller than the point, but no less ferocious. One of its allures is that the reefs are less shallow, lowering the risk of injury. If you can catch a barrel from the middle, you can sometimes ride it for hundreds of metres.

The inside (Shish Kebobs) is where the adrenaline really starts pumping. The barrels move fast and the reef is shallow and uneven. If you lose your footing while riding the inside, you stand a good chance of getting scraped and cut.

Cloudbreak is known for its fast barrels. Light winds from offshore move against the face of the waves, causing the lip to fold into a tube. Tube riding is every surfer's dream. And the tubes at Cloudbreak easily rival those found at other favoured Fiji surf spots.

Riding the barrels at Cloudbreak seems easy. But doing so successfully actually takes a high degree of skill. Pulling into the barrels requires speed and agility. Although you'll slow down to go deep into them, you'll need to move fast to rocket back out.

You also need to know how to wipe out safely. A perfect ride can come to an abrupt end, with the wave pushing you toward the ocean floor. The shallow reef along the inside presents an ever-present danger. If you fall off your board, take a deep breath and use your arms to protect your head.

It's Not For Novices!

One of the things that makes Cloudbreak so exciting (and treacherous) is that its swells can slam into the corral reef from different angles. That produces a range of wave conditions that can confound even experienced surfers. If you're learning how to surf, it's a good idea to stay on the sidelines and observe others as they attempt to conquer the waves.

If you're coming to Fiji to surf, visit Namotu Island Resort. It has earned a reputation as the surfing enthusiast's number one surf retreat.