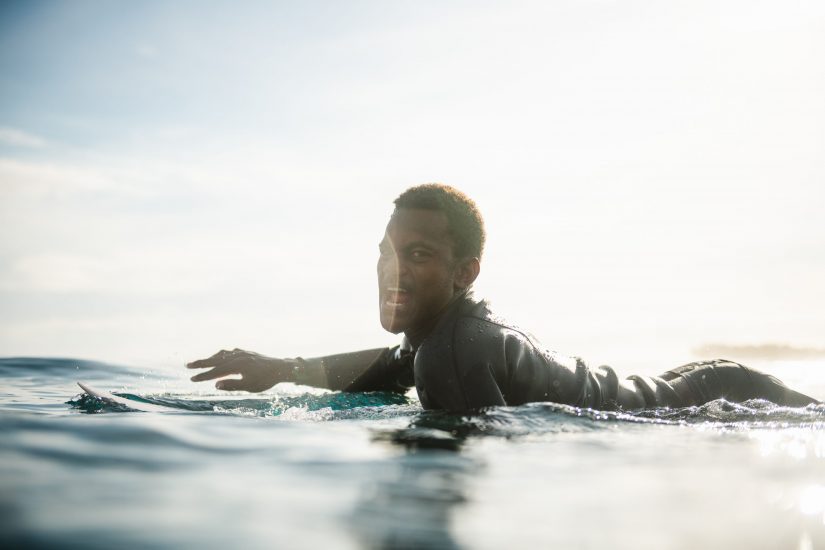 Last week local Namotu surf guide, Api Tibinaliva competed in the Druku Memorial surf contest for the “King of Cloudbreak.” Next he’ll be competing at the ISA Games in Japan to qualify for the 2020 Tokyo Olympics!

On Wednesday 12 June 2019 some of Fiji’s best surfers gathered at Cloudbreak for the annual Druku Memorial. Our very own surf guide, Api was in the mix along with former surf guide, Tevita, local surfer Inia and the country’s best shredders.

Despite nursing a shoulder injury and being the youngest to make the finals, Api surfed incredibly but was bested by WSL wildcard entrant, Tevita Guikilau (1st) and Aca Ravulo Nabila (2nd) and Inia Nakalevu (3rd). The womens event was won by Kiesha Wakeham.

But that’s only the beginning… Api will next visit Japan to compete in the ISA World Surfing Games in Japan, serving as the first event to directly qualify surfers for the Tokyo 2020 Olympics. Surfers will qualify from the 2019 WSG on a regional basis, with the top eligible man and women from Europe, Africa, Asia, and Oceania landing a spot at  the Games. The Americas’ regional qualification will come from the 2019 Pan American Games, where Surfing will make its debut.

Api, Kalani Wakeham, Inia Nakalevu and other qualifiers from Europe, Africa, Asia, and Oceania will travel to Japan in just a few months to compete at Kisakihama Beach, Kyushu to qualify for the first surfing event ever in the Olympics.

We can’t wait to cheer on and support Api in Japan! Stay tuned on how you can support his journey.

Bianca Brown was on-hand to shoot the comp. Here’s her gallery featuring Api.

Meanwhile in the USA, Namotu guest Alex Woodard was reflecting on his trip to Fiji the week before and penned the following story about Api, AKA Happy.

Deep, fleshy rakes across faces, legs, and backs are an almost compulsory toll taken by the wave gods in exchange for this wall of water, legendary for both its perfection and propensity for breaking over a razor-sharp dry reef. One of us suffered a coral head’s punch to his ribcage in the first few days here, and he’s been drinking Fiji Golds and watching the horizon ever since.

I’d just kicked that reef myself a few days ago when I saw Happy racing toward me, a massive grin plastered across his face. The crashing lip clipped his head and he fell hard, but emerged from the frothing whitewater unscathed and laughing. He paddled over to me, sat on his board, smiled, and told me he surfs this wave every year, and maybe he should take a break since he usually doesn’t eat shit like that.

He meant every day, not every year. Happy works on the island as a boat driver, shuttling us around to world-class breaks and smiling a lot. He reminds me of Ulai 25 years ago… young, lean, and always stoked. He leads with joy and is gaining repute as an aspiring professional surfer, but I know him best as the Fijian who most lives up to his name.

I’d been in the water since a little after sunrise, surfing with a few guys I’d met on this trip. My shoulders were no longer willing to cooperate, so when I saw one of the island boats approach, I waved and started paddling toward the channel.

Happy threw my board in the boat and I clamored over the wooden rail. As we swung toward the island, I noticed the name embroidered on his shirt.

All this time I thought he was Happy.

Posted on Thursday, June 20th, 2019 by Namotu Island in Surfing In Fiji, Uncategorised