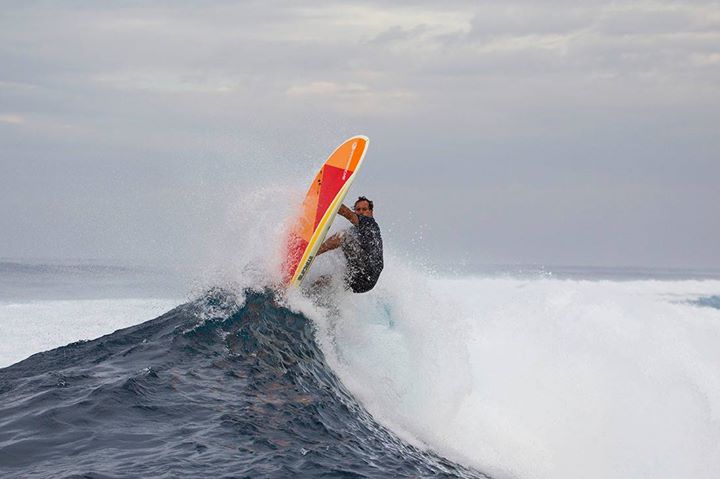 The surf in Fiji has different personalities based on swells and local winds. Where swells originate, along with their size and direction, influence the power of the waves. How local winds blow across the water will determine whether the surface is clean or choppy.

For example, a storm 50 miles offshore will generate swells that gain momentum and size as they approach a break. Big swells generate powerful waves, but don't always produce ones that are ideal for surfing. A lot depends on the wind.

Offshore wind helps swells grow in strength while leaving the water's surface relatively undisturbed. By contrast, onshore wind cuts into swells and causes the surface to become rough. Powerful swells with little to no wind are considered ideal because they produce beautiful, clean surf.

At some point in their journey, swells break. How they do so determines the type of wave that's created.

This break is so-called because the swells break on a point of land, rock, or corral that projects off the shore of a larger body. The point breaks the wave and slows it down. In doing so, it reduces the wave's power, but simultaneously extends it. Waves found at point breaks have been known to extend for hundreds of yards.

An example of this type of break can be found at Resorts Left, located south of Natadola Bay. There, swells break on corral, producing clean surf you can ride for more than 100 yards.

Reef breaks are where you'll find barrels and pipes. Every surfing magazine that has showcased the surf in Fiji has carried numerous photos of gorgeous tubes being tamed by experienced surfers. Those tubes are created when swells break on exposed reef beds. The waves bend over the reef, producing a tube.

One of the most revered traits of a reef break is its consistency. The shape of the waves is predictable. When you know the direction of the swells as well as the local wind conditions, you can anticipate the size, shape, power and behaviour of the surf.

The most popular surf spots in Fiji – e.g. Cloudbreak, Namotu Lefts, Restaurants and Wilkes – are reef breaks. These are the waves chased by surf pros.

Beach breaks are found wherever swells break on the sandy ocean floor. That usually occurs near the coastline where the floor tends to be at its shallowest. The floor breaks the swell's momentum and causes its energy to dissipate.

The shape and strength of the waves at beach breaks are somewhat unpredictable. Much depends on the curve of the ocean floor. Because the floor is always changing, it is all but impossible to anticipate the waves that might emerge.

Beach breaks are fantastic places to learn how to surf. The waves are generally small and easy to manage. Experienced surfers, however, would be better served taking on reef and point breaks.

The waters surrounding the Fiji islands are filled with reef breaks. Find out how you can gain quick access to them while staying at the world-class Namotu Island Resort.