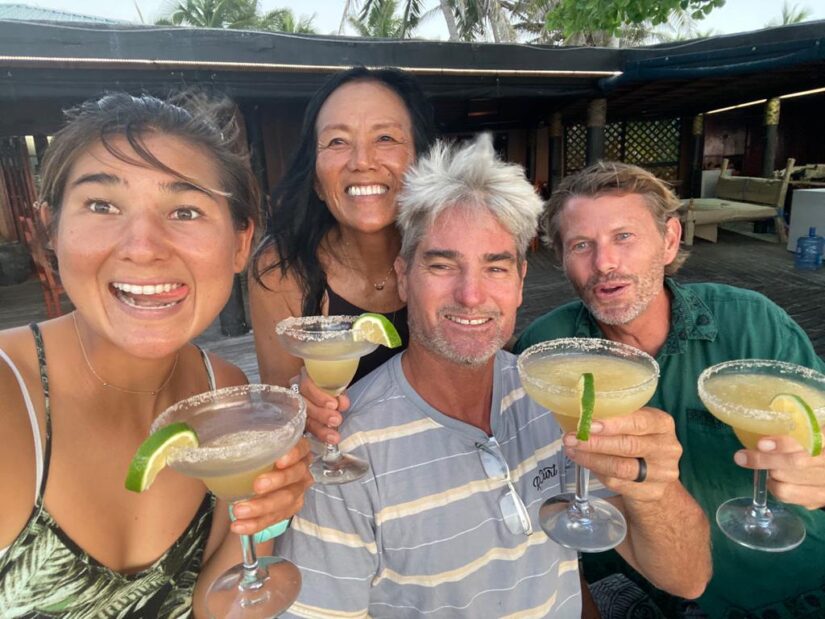 Picture this… it’s March in 2020 and you arrive to Namotu just as COVID-19 is exploding and the world is turning on its head. As borders close and flights are cancelled you must choose; stay indefinitely or go immediately.

Australian surf guide, Ben Wood (42) was in just that predicament. As chaos took over, Namotu’s manager, Mike Hennessy announced he had either 20 minutes to pack his bags and get to the airport or stay. Ben rushed around but couldn’t pack quickly enough and figured a month or so on the Island would be pretty fun. But as the world collapsed and a cyclone struck, he realised it might be a little more than he bargained for.

Ben is a surfing, yachting and windsurfing expert who’s been volunteering on Namotu Island as a surf guide since 2006. He’s spent a lot of time in Fiji and travelled the world sailing, windsurfing and surfing. We are so grateful to have had Ben on the Island over the last few months to lend a hand with everything from doomsday prepping and cyclone cleanup to maintenance, landscaping and the dishes.

After 8 months in Fiji, Ben finally sailed back to Australia so we thought we’d ask some questions about his time on Namotu and the journey home.

So was it everything you might imagine or did paradise turn to prison?

What were the things you enjoyed most about your time on Namotu?

Surfing, fishing and windsurfing. And the food was out of this world! Katie and Brisa Hennessy are magicians in the kitchen. I can without-a-doubt say I’ve never eaten so well and so healthy in my life. The girls ate full vegan but we (Mike and the rest of staff) ate fish also.

Oh yeah and I really got into exploring the reefs with fins and mask working out how all the waves worked. Setting new line ups and just understanding better places to fall/escape etc.

Were there times you regretted staying?

It was a weird kind of feeling, like the world was ending. Especially when we were collecting firewood or Rodd Owen (slightly neurotic Namotu photographer) was messaging daily that we were never leaving. Did I ever regret my decision though? Never!

I did miss family a lot. My daughter who turned 7 when I was out there lives in the Canary Islands so I missed my time with her this year and it looks like I won’t see her for a while yet unfortunately. That was another reason to not get locked in Australia, with the idea to maybe got straight to Europe from Fiji. The rest of my family live in Sydney. Thanks to Video calls though, that makes it easier.

What were the biggest challenges?

The biggest challenge was Tropical Cyclone Harold. That was my 4th cyclone on Namotu and the amount of clean up is crazy!

How was the surf?

When it first locked down not even the locals could come out so we had days where there was literally no one out. I remember days where it was Mike, Katie, Brisa Jeff (Hawaiian surf guide who stayed until July) and myself. We had days out at Lefts that were simply pumping with just Katie, Brisa and I. We had some different swell angles when Lefts really pumped, like I’d never seen before and days with Tavy Rights to ourselves, just cooking.

Once restrictions were eased Restaurants got “busy” with 10 people out. Pools we had alone with water like mercury and I remember NNW winds and Wilkes just pumping. I actually surfed Wilkes by myself loads.

Cloudbreak was a dream to surf and there were times we had it with just us but mostly we were out with the locals and yachties. The crew in the water were all so good and it was the same faces each time for months. The vibe was full on Fiji mellow.

I didn’t surf Despo’s once!

How was windsurfing Cloudbreak and the Trade Wind season?

I windsurf and we had a lot of Trades so I was lucky enough that the old company I worked for (Severne Windsurfing) sent me a full setup. Namotu Lefts was insane so I’d sail out the front as much as possible until I broke my only mast. I managed to fix it and then thought I may as well sail Cloudbreak as I had nothing to lose. I remember going up there one day by myself on Mike’s ski (thanks mate) and it was so rough getting there. I tied up and sailed mast-high/8-10ft Cloudbreak by myself, which was intense and pretty scary. I made it out ok but can remember a lot of nervous giggle moments. From start to finish that was a full adrenaline experience.

Another time I went with Jone (Namotu engineer) and I hit the lip too late and ended up going over the falls backwards, breaking my mast and sail, followed by the full tour. That was my last windsurf.

Honestly, looking back I remember so many sick sessions. I broke loads of boards and gear, bounced and definitely paid my reef tax. I even had my shorts ripped off twice and was injured a lot but still had a big smile on my face.

How was the fishing? Any tall tales?

Mike is a legend. I learnt so much from fishing with him, it truly was a pleasure to go out on his fishing World Cat, Vuvale AKA, “ Get the Dog”. We caught so many Yellow Fin Tuna. Then the season changed and we were pulling Mahi Mahi and Walu. All the time deep dropping when possible. We did some tournaments with Charles and Jone where we hooked one solid Marlin but didn’t land it. I saw an enormous Mako shark swim under the boat one day, that thing was massive.

Did you pick up any other skills during your time on the Island?

I got pretty good at washing up dishes! I also did a little foiling but we decided it was a bit too dangerous without much medical support. I also did some kiting that was so out of control and got better with handling the sea snakes.

Did you make some good friendships during the stay?

I made some lifelong friends for sure. It was an experience that we all shared together so I think we will always have that bond.

From what you experienced, how is COVID-19 effecting Fiji and the Fijian people?

From what I saw and experienced I think the Fijian people are so resilient; they thrived with everyone back in the villages, planting new crops and working together. Families were together again. But it has affected things massively, especially as the economy is so heavily dependent on tourism. The Fijian people should be commended as they have really grouped together.

Do you have any opinions about the short and long term future of Fiji as we continue to manage COVID?

As long as the majority of the tourism industry can survive the drought, then as soon as Australia and New Zealand can open up the Pacific bubble we will see a big change to start the road back to full tourism.

How did you come to sail back? Why not fly?

Well I nearly flew through New Zealand but then they had a spike again and with the restrictions on the number of people being allowed into Australia I thought, “you know what, I’m going to sail it”. I’ve done a lot of sailing previously and used to train yacht master courses for work. Actually  the first time I came to Fiji I was based in Suva training the sailing team for the South Pacific games so I felt ok with it really.

What was the sailing trip from Fiji to Australia like?

It was a trip, I’ll say that much. I sailed with Rick Page, he’s a best-selling yachting author.

The trip took 13 days at sea but I was on the boat for 18 in total before we were let off the boat in Australia. We had really rough conditions leaving and for the first days but then it was mostly downwind.

You see nothing but blue horizon for the whole trip. Mental sunrises and sunsets but also a lot of repairs; auto helm, water pump, impeller, snapped halyards, bent headsail cars and rudder stress. The last days coming over Fraser Island and into Bundaberg it was howling and really rough but we arrived safe and sound.

What’s next for you?

I’m back in Sydney and back to work for now. After so long without work I have some catching up to do. But I’ve actually just been surfing…

Do you ever want to see Namotu again?

It’s the best place on earth and if there was a flight tomorrow it be on it! Actually I might just have to sail over again! For sure I just love the place like so many do and I have lots of incentive to return to say the least.

I want to say an enormous thank you to Namotu. I can’t thank the owners enough for allowing me to stay. I worked my ass off to say thanks. Thanks Also to Mike, Katie and Brisa for being so supportive and just a great family. Also to all the Fijians, I had the best time with you guys. Finally I can’t wait for the Island to be reopened. It’s looking the goods and ready to be host as the best place on earth!